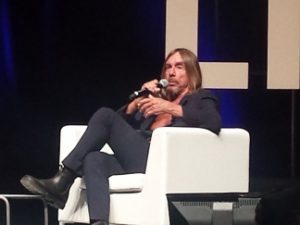 Iggy Pop (pictured), the outrageous rock music legend notorious for an inability to keep his clothes on during performances, came to this year’s Cannes Lions International Festival of Creativity to discuss ads. He did not disappoint.

As we sat among his admirers in a packed auditorium, we at JayKay Media learned he will be 70 years old next year.

But the man famous for his collaborations with David Bowie and his now iconic Lust for Life album proved he had not slowed down in the least.

With his signature straggly hair and easily recognisable enthusiast-of-excess wizened face, he wore nothing under an opened jacket that revealed part of his aging but still muscular body.

He talked about his current tour and how he still enjoys stage diving into audiences. And, after more than 55 years in the business, the “godfather of punk” has won over another generation of fans. This year, he clinched an international Top 10 hit album with Post Pop Depression, a collaboration with members of the US rock band Queen of the Stone Age.

And, after more than 55 years in the business, the “godfather of punk” has won over another generation of fans. 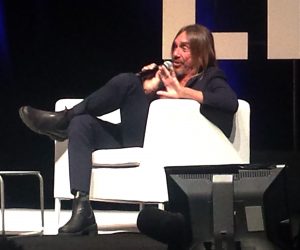 All nice and well, but what was he doing speaking at Cannes Lions, the annual festival dedicated to the global business of advertising, advertisers and ad agencies?

Iggy Pop was among the high-profile celebrities invited to share their experiences as brands in their own right, as entrepreneurs, as visionaries and as influencers.

Between 2009 and 2011, the singer was incongruously appointed the ambassador and TV commercial star for insurance company Swiftcover.

What could have been a comparatively graceful career development into respectability descended into controversy as fans accused him of selling out, while detractors noted that, with his reputation, he would not have been covered by Swiftcover.

Today, in his seventh decade, he promised the Cannes Lions audience he still has no plans to “go gentle into that good night”.

What else did JayKay Media get up to during Cannes Lions? We interviewed Usher, the US singer (he’s won the Grammy Award eight times), songwriter, producer, actor and entrepreneur, at Cannes. On that day, his mind was occupied by two non-music projects.

Usher the businessman was also celebrating his good fortune as a shareholder in the Cleveland Cavaliers, which won the US professional basketball’s NBA Championship for the first ever this year.

Hollywood A-Listers came to talk about their relationships with the world of brands and marketing. 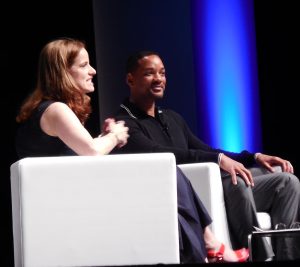 The multi Oscar-nominated Will Smith, who is also a Grammy-Award winner, has seen his career stratospherically soar to starring in this year’s DC Comics actioner Suicide Squad.

He has come a long way from playing the lead role in the Fresh Prince of Bel Air TV comedy in the 1990s via movies that have made US$6.7bn-plus globally at the box office.

But Smith (speaking to Edelman’s Jackie Cooper above) was in Cannes to promote Just Water, the environmentally friendly bottled water that he supports.

Movie character Magic Mike was also in town, but not to strip off. His creator, Hollywood leading man Channing Tatum (below), has joined the growing number of celebrities (including former England football captain David Beckham, hip hop hot shot Sean ‘P Diddy’ Coombs, George Clooney, Brad Pitt with Angelina Jolie, and Justin Timberlake) who own their own alcohol beverage brand. 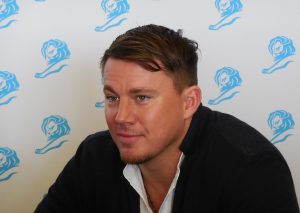 In Tatum’s case, it is the home-crafted Born and Bred, a made-in-America vodka cultivated from Idaho potatoes by Grand Teton Distillery. A European launch is in the pipeline.

With provocative hit movies like Born on the Fourth of July, JFK, Nixon, and Wall Street among his repertoire, outspoken American movie director Oliver Stone (pictured below) does not know how to avoid political controversy. 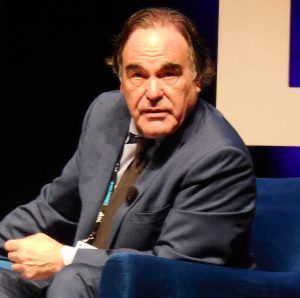 Snowden, his most recent film, which is scheduled for release this September, is about the computer expert/whistleblower Edward Snowden, who is currently hiding in Russia after leaking classified US government information.

Stone informed Cannes Lions attendees that wary US movie studios would not touch Snowden, forcing him to turn to German and French funding to get the film off the ground.

Unable to stray too far off the topic of politics, he commented about global events, including the pending US presidential election: “I would like to see a balance in the world. There is a need for balance. When one power becomes too strong, there’s disruption.”

Among other high-profile speakers was Anna Wintour (see below), the Vogue magazine supremo and artistic director at the Condé Nast publishing empire. She isn’t exactly known for her sense of humour. But she delighted the audience with a comedy sketch video featuring herself and comedian Amy Schumer. 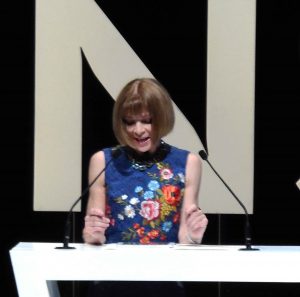 Award-winning US journalist and CNN anchor Anderson Cooper has garnered accolades for his coverage of the human tragedy that followed Hurricane Katrina in 2005 and the Haiti Earthquake of 2010.

At Cannes Lions, he took a break from the serious side of his profession during an onstage talk with his friend Anthony Bourdain (below), the chef, author and TV personality. As they talked about their favourite food and drinks, you could see Anderson was simply having a blast (see triptych above). 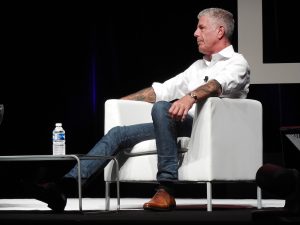 Among the tech innovators who captured attention at Cannes was Kevin Plank (below), the CEO of innovative US sports performance apparel company Under Armour. 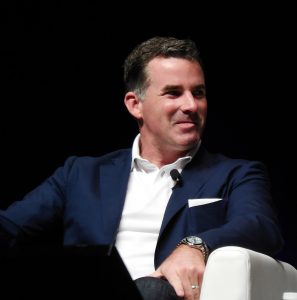 In an intimate conversation with David Droga (below), CEO of creative ad agency Droga5, Plank explained he has been driven to use wearable technology to take on incumbent heritage sports brands like Nike and Puma in the 21st century. 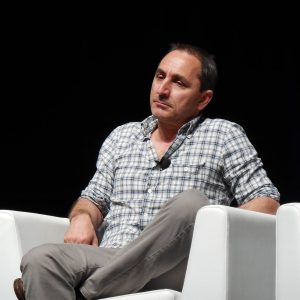 And he is hot on their heels. His company’s value is expected to soar to US$5bn by the end of 2016 from US$1bn a year ago. 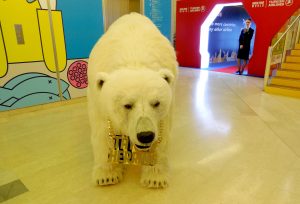 It is a semi-animatronic animal brought by PR agency Taylor Herring after it had been used early this year in a marketing campaign for UK satellite TV network Sky to promote Fortitude, the gripping drama series set in the cold and icy Arctic.

JayKay Media Inc was at Cannes Lions courtesy of the Lions Daily News, which is produced by Boutique Editions, the London-based contract publisher specialising in high-end print and digital titles.