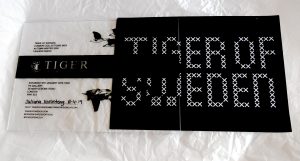 The brand is favoured by some of Scandinavia’s hottest and hippest music acts (think of colourful rockers The Hives, members of the dance music super group Swedish House Mafia and award-winning electropop duo Icona Pop).

Inspired by the culturally beautiful and bountiful central Sweden province of Dalarna, famous for its long snow-bound winters, Tiger of Sweden’s 2016 Autumn/Winter collection brought Nordic panache to the men’s LFW, which ended earlier this week.

The 113-year-old brand displayed its contemporary flair with a mixture of jackets, coats, suits, jumpers and trousers in mostly muted colours. From the monochrome to understated shades of pink, peach and apricot, the collection’s hues are said to be “reminiscent of the farmers and factory workers of rural Sweden”.

After several months of intense preparation, the show was over in less than 15 minutes. Short but stylishly sweet.

And less than an hour later, the disciplined crew had cleared the venue of the seats, the stage and music instruments. Backstage, the clothes were packed and ready to be shipped to their next destination, while executives and friends sped off to the next media briefing, party and/or home.

JKM Inc would like to thank Tiger of Sweden’s marketing/PR manager Erika Johansson for one of the most brilliant 15 minutes ever. Enjoy the video.